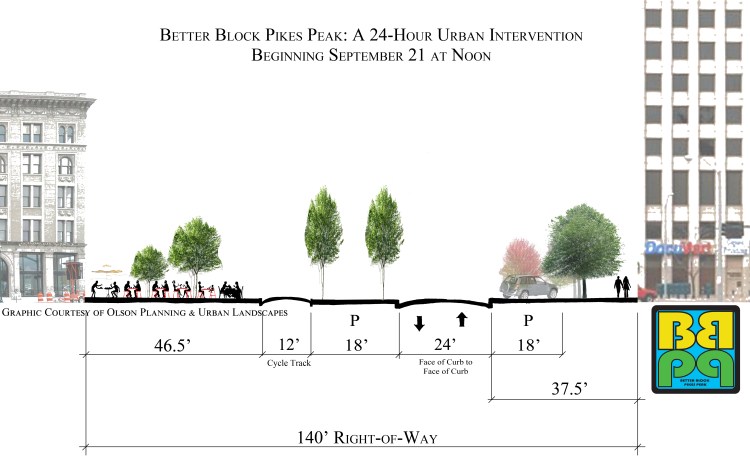 A few years ago, my good friend Nick Kittle asked for what he called a “list of ten”. For some background, Nick was the Public Works Director at the time, and I often challenged him on what could be done in Colorado Springs. The “list of ten”, as I saw it, was a way to get the proverbial monkey (me) off his back.

Nick, an individual who did so much for our city, committed to take care of at least one of the items – Better Block Pikes Peak (Sept 21, 2012). While I don’t have the list anymore, I’m positive that Nick took care of more than just the one item.

I decided that now was a good time to create a new list of ten – unsolicited this time and except we’re only going to do five for now… because five is more digestible for 2018. Many of these items were probably in the original list, and all of these items are to help create a healthier (physically and economically), more walkable Colorado Springs.

Strides have been made to the downtown core of Colorado Springs in new development, better parking meters, and yes, less vagrants begging at the street corners. More can be done and it starts with reprioritization of what is desired downtown. The desire for downtown is to have more pedestrians and less cars (note that I didn’t say no cars… See Everyone loves pedestrian malls. To accomplish this, we need to reallocate land from cars to people. The easiest way to do this is to remove the places where we are simply invoking cars to move faster (thus more dangerously) – turn lanes. 11-ft of space can be attained and reallocated to the wider sidewalks, sidewalk cafes, etc. with this turn lane that today is mostly used for loading beer and delivery trucks. We have an alley for this purpose. (Full dosclosure, these measurements are general numbers, likely conservative to the actual dimension).

We are fortunate to not have a plethora of one-way streets in Colorado Springs, but we still have two very dangerous ones. Bijou and Kiowa exist still today as what is referred to in traffic planning as a one-way pair. The logic behind that is to move traffic in and out of downtown faster. While this is sound logic if you’re the delivery, taxi or an Uber driver, this conflicts directly with both pedestrian safety and storefront value. Small, downtown shops do not benefit from high speed traffic, their signs and frontages are scaled to the pedestrian, unlike a McDonald’s or Wal-Mart. The fact that there are three lanes instead of two in each direction (one for Bijou, one for Kiowa), does not increase volume, it increases the ability to jockey lane to lane. Safety should be prioritized over a few seconds of speed. If safety alone isn’t the top priority, it undisputedly should be when paired with economics.

At this point, you’ve probably picked up on it that I’m picking on Downtown. Guilty, but I’m going to stop with this one, although I could probably come up with a list of ten for downtown alone. Fortunately, there is a recent downtown master plan that is available for your reading pleasure.

This item is directly related to the prior two items. We really need to prioritize the safety of the pedestrian throughout the city over minor vehicle to vehicle collisions. Collisions at 5, 10, or even 15 mph will always occur, but thankfully, people do not often die in collisions at these speeds. Vehicles racing through red lights however, that is where the risk of death is real. Tejon Street in Downtown is not, and will not be a heavy through-street. It is a street where pedestrians walk and cars search for the closest place to rest. It is a street that creates economic value.

I digressed far too long, back to the item, why can’t the streetlights all be 4-way stop signed intersections? Would it be so horrible to have to stop at the intersection before turning? Chances are, you stop anyway for a pedestrian. The only other movement is through the intersection and do we really want cars traveling at lethal speeds through our most dense pedestrian zone of the city? Let’s save some money (and lives) and revert to 4-way stop signs downtown (granted I realize that not all intersections can get by with just a 4-way stop, but most can).

This item has been hinted at with many prior blog posts and the inaugural intervention of our Colorado Springs Urban Intervention group in 2012 with Better Block Pikes Peak. The idea shouldn’t sound too crazy, but accomplishing it would be a major milestone for Colorado Springs – that is to have a right-of-way with less than 50% of the area dedicated to the automobile.

For example, the current allocation of Pikes Peak Avenue between Nevada and Tejon is approximately 102′ for the automobile and 38′ for the pedestrians and landscape. That is a ratio of 51:17, or in rounder numbers about 5:2. These numbers are actually higher than most streets with wider sidewalks installed in the 80’s. The Better Block cross-section below shows the allocation during the 24-hour intervention where we decreased the ratio to 72:68 (much closer to a 1:1 ratio) but still not 50% or less.

There are multiple opportunities to achieve this ratio, thanks to the foresight by General Palmer with his wide right-of-ways at the cities founding emphasizing views of America’s Mountain. My understanding of General Palmer’s vision though was not to dedicate it all to the automobile which we have been doing. General Palmer despised the automobile until his mobility eventually depended upon it. A twisted fate of irony for our city has seemingly sentenced the citizens to the same dependence today.

Okay, so this is the part of the post where my fellow west siders, get mad at me… some of them anyway. Take yourself out of Colorado Springs for a minute and picture yourself in central Kansas – now imagine that it’s not a windy day (just kidding Kansas I still love you). The road is a simple two-lane road with old glorious Victorian homes on each side. Suddenly, the road widens to four-lanes as you approach downtown. Does it beckon you to stop in for coffee and a sandwich or do you now see the opportunity to pass the old Buick you’ve been following and find the McDonald’s approaching after you exit downtown? Sadly, it’s the latter. Impatience is not a reason to harm the economic value of a place and make it unsafe for its residents. This is a constant struggle with small town and historic business districts.

My point is that a 4-lane Colorado Avenue does not serve Old Colorado City well economically or to increase pedestrian traffic. Increased on-street parking would however and West Colorado Avenue has the opportunity to do just that. This item has and will continue to be discussed, and the discussions are imperative to the health of the West side.

Mayor Suthers has stated, many times, about his vision “where the infrastructure and amenities of our city are worthy of the incredible natural beauty that surrounds us.” We can do it Colorado Springs! We may just have to think a little differently.